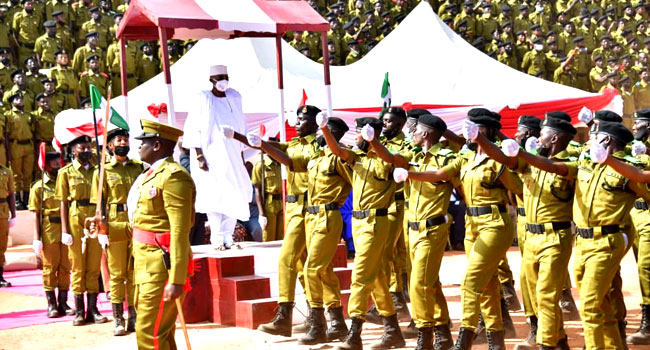 By Ngozi Onyeakusi—The National Drug Law Enforcement Agency has said that it discovered travellers’ cheques in different foreign currencies with a total value of N1,157,670,469 at the Murtala Muhammed International Airport, MMIA, Ikeja Lagos State. The anti-narcotics agency also said that it arrested a suspect, Oguma Richard Uchenna, who was attempting to export the cheques, which were neatly concealed inside four bound hardcover books disguised as academic project literature, to the United Kingdom. The financial instruments suspected to be counterfeits were discovered on Wednesday, April 27 at the NAHCO export shed of the Lagos airport during cargo examination of some consignments meant for exportation to the UK on a cargo flight.

According to a release from the agency operatives of NDLEA at the airport foiled “an attempt by drug traffickers to smuggle into Nigeria 10.89 kilogrammes of cocaine through a Qatar Airways flight. The illicit drug was hidden in seven children’s duvets packed in an unaccompanied bag from Brazil. Meanwhile, raid operations in Kaduna, Ondo and Akwa Ibom states have led to the seizure of about 2,000 kg of Tramadol, Codeine, Cannabis and Heroin. In Ondo state, 401kg of cannabis was recovered and two suspects: Julius Dapo, 56 and Emeka Ikebuaku, 32, were arrested at Ipele forest in the Owo area on Sunday 24th April. On the same day, a transborder drug trafficker, Chigbo Chinonye, 42, was arrested with amphetamine weighing 2.5kg and heroin weighing 0.5kg during a stop-and-search operation conducted along Oron- Ibaka Road on his way to Cameroon.

“He concealed the drugs using false bottom packaging. In Kaduna, a total of 47 cartons of suspected fake Tramadol, comprising 2,350,000 tablets, weighing 1222kg were seized in Zaria on 25th April while a dealer, Chinedu Asogwa was arrested the following day, 26th April along Abuja-Kaduna expressway, with 2919 bottles of cough syrup with codeine, measuring 291.9 litres and a gross weight of 396kg. While commending the officers and men of the MMIA, Ondo, Akwa Ibom and Kaduna Commands of the Agency for the seizures and arrests in the past week, Chairman/Chief Executive of NDLEA, Brig. Gen. Mohamed Buba Marwa (Retd) charged them and their compatriots across the country to remain steadfast and vigilant in their areas of responsibility,” the statement by Femi Babafemi, Director, Media & Advocacy, said.